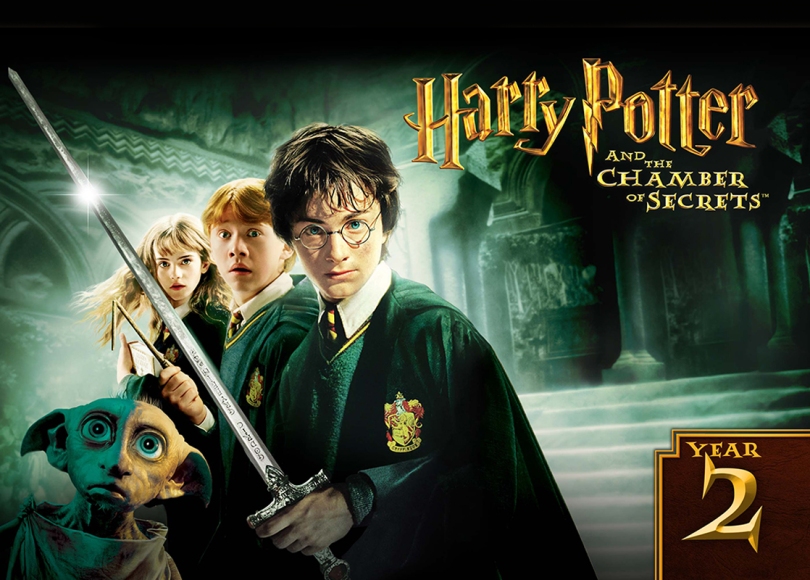 What is considered by most to be the worst in the Harry Potter series is the second installment in the continuing story of our hero wizard Harry Potter and friends. If not the first film, than it’s this one that I have seen the most growing up than any of the others. At the time I remember there only being the first three films available and I would go to the library every week to check them out. This is one of my most memorable of the series from the sheer fact that I have seen it more times than I can count, but within the last few years I haven’t seen it but once or twice. It’s been well over a year since I last saw it and I’m well aware of the general dislike of it. Not necessarily dislike but feelings of it being the worst of all of them. I’ve had more time since last watching it to hear the complaints so I went into watching it this time with a bit of a different perspective to see if it does seem weaker than the last time I watched it.

The Chamber of Secrets brings us back to our hero Harry Potter and his adventure into his second year of Hogwarts. What this movie starts with is another look at the family that he has to live with during his time on break. It’s a refresher of the bad situation he’s in and how this essentially the worst part of his year. This time around he actually has a room! And we get introduced to a new character, a house elf named Dobby. His appearance whether it be CGI or practical or a mixture of both is very good and holds up, especially because of the humor he brings. I like that it comes up with a new way for him to get to Hogwarts especially since his aunt and uncle don’t want him to go. In comes Ron and his brothers who break him out of bedroom jail with their flying car. Maybe it’s just me but I always loved seeing the flying car and how cool it looks when flying. The visuals still hold up, maybe not the best but considering this was back in 2002, I’m quite surprised.

With all of the setup in the first movie, this one is able to take time to expand on characters and add depth to them. In this case, it gives us a good look at Ron and his family. We get to see where he lives and how they may not have a lot of money, but they are all very close and tight knit. It’s very apparent as you go through this movie that it’s all about family and bloodlines. It takes time set up more depth for the families and characters that will later become important, but also makes the development relevant to the overall story. Beyond just Ron and his family, we get a little insight into Hermione and Malfoy’s families. It goes deep into the whole blood purity of wizards like Hermione who is born of two muggles. The derogatory term for that is “mudblood” a name that hurts Hermione very much when Malfoy directs it towards her. You also have some wizards that are born from one magic parent and one muggle parent. Stronger of course than both being non magic, but then you have the pure bloods like Harry and Malfoy. They both have parents that were witches and wizards. It’s interesting that they go about introducing this bloodline hierarchy of Malfoy thinking that pure bloods have stronger magical capabilities than that of anyone else despite Hermione being one of the best students with no magic parents. The movie does a good job at expanding on this whole dynamic between the characters and how people in the magic world look at this bloodline issue. I love that Hermione is living proof that those people aren’t wrong and that bloodline really doesn’t matter, especially since most kids are born of parents that are a mix of both.

Going back to Ron and his family, there is another dynamic that comes into play that is expanded upon that also involves the familial bloodlines. It gives us two examples of pure bloods with the Weeasley’s and the Malfoy’s. Both of the families are pure blood, but when we first get to see them together in this movie, it’s at a shop and we very clearly get a difference between the actual families and the social hierarchy that is in play in this society Even with magic, there is still a split between those that are rich and those that are poor. The Weasley’s and Harry are all covered with dirt from there trip through the fireplaces while the Malfoy’s are very clearly clean and seem to have a much more classy way of arriving to Diagon Alley. It certainly puts a lot in perspective and I feel is often overlooked in this movie. It was the first in the series to really start to expand on some of these themes and really sets up a lot of depth to these characters that comes into play in the other movies.

Not only does this movie take time to develop the actual characters, but it also gives a strong mystery involving a beast of sorts that is going around and petrifying students. It’s a mystery that slowly unravels and gives us just enough to wonder who exactly is behind it all. It’s safe to assume that it is Voldemort from the shadows, but it would take somebody else to fulfill his plan. They also take the time to put this hero of ours into an unusual circumstance. It builds on a minor thing from the first movie when he talks to the python at the zoo by bringing that back into play and making it an important aspect to Harry’s character. We learn that not many people can do it and it actually scares most of the students and makes them think that he has something to do with the attacks. It paints a different picture of Harry than the version of him we saw in the previous film. He has a lot to prove this time around and more questions about himself that add more depth to him. We also get a hint that there is more connected between him and Voldemort that we don’t have an answer to yet, but adds more mystery to the overall story.

Along with this very engaging mystery, we get build up on the Voldemort character by finding out the he was formerly a student at Hogwarts and that his real name is Tom Riddle. By doing this, the film not only expands on the narrative its telling, but also expands on the overall narrative in the overarching story through the series. It gives us more depth into the Voldemort character and learn that his real intention is to do anything he can to come back to life. Now, his plan in this movie really didn’t make a whole lot of sense and could’ve been explained a little better, but it is what it is. We also get a cool fight between Harry and the Basilisk. The Basilisk actually surprised me because of how good it actually looked. I’m not sure if they spent most of their budget on it or what the case was but that serpent certainly holds up very well. Along with the giant spider and smaller spiders in the woods. Aragorn seemed to be a practical effect that still creeps me out, and the smaller spiders seem to be CGI, but either way, they creep me out now and they really creeped me out as a kid. I’m very pleased with how well the visuals held up in this movie.

The only other things I can really point out is that we get our new defense against the dark arts teacher in Gilderoy Lockhart (Kenneth Branagh) who is a complete fraud in his success and its very apparent that he doesn’t know what he’s doing throughout the movie. At times this tends to be annoying and in other times it seems to be some perfect comedic timing. Either way though, the character is performed extremely well by Branagh which brings me to another point. The casting of supporting actors in this series is absolutely ridiculous and really takes off in this movie by adding Branagh, Jason Isaacs as Lucius Malfoy and even Toby Jones as Dobby. It’s just a ridiculous cast of supporting actors.

In the beginning I said that this was one of the least liked of all of the movies for most people, but for me it just isn’t the case. Shoot, even when I thought about it before watching it this time around, I was thinking that it probably was the weakest of all of them, but I came out pleasantly surprised. I took time to really take in the characters and story to get a good grip on the importance of this movie. I know that some people feel that it just doesn’t seem as impactful as the other movies. For myself, I find everything they say to be wrong. This movie builds on everything that was set up in the first film and expands greatly on that. It then takes everything that was good in the first movie and makes it better. For a sequel this tends to be difficult to do, but honestly this movie is a step up from the first one. Some of the things it introduces absolutely plays a part in the later movies and is far more important than previously thought. It has an intriguing story and some great visuals that hold up very well. For anyone that felt like this movie wasn’t significant enough or wasn’t good, you should really give this another shot and really try to take in everything that’s being presented and what’s built upon. This is absolutely a great addition to the franchise.