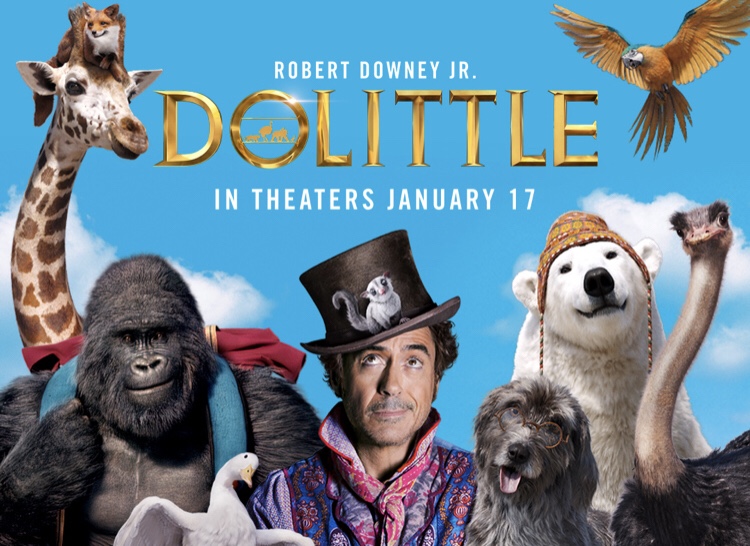 Robert Downey Jr’s legacy as an actor has been throughly cemented with his role as Tony Stark. Even on his comeback all the movies outside of the MCU have not been as big or well remembered. The best would be his Sherlock Holmes films with Judd Law and directed by Guy Ritchie. So his first role now that he’s out of the MCU is as Dr Dolittle, best remembered in those not great Eddy Murphy movies, is weird and out of left field.

The movie proper follows Robert Downey Jr’s, John Dolittle who has gone into seclusion after the death of his wife. He is called upon years later to save the queen of England’s life or face losing his animal sanctuary. He is joined by his animal sidekicks and apprentice to explore distant lands and find a magic fruit that could save the queen’s life.

It felt like someone had a really sharp, adventurous, gritty script for this movie at one point, but just got totally changed into a painful children’s movie. There is some grit and edge so far on the peripheral that it is close to nonexistent, but some scenes and ideas do feel like they were more fleshed out at one point. It didn’t start badly. The opening animation explaining John Dolittle’s life works and seems like a far more interesting film than the one we got. The film being an adventure flick works in concept, but everything about it fails. Even Robert Downey Jr doesn’t work.

All of the actors in fact are the worst version of their cliché. Michael Sheen plays a sniveling rival doctor who should be funny in his whiny tone, but isn’t. The kid playing the apprentice to the doctor is very flat, and all the voice actors are doing stock kids movie voice over. That means bad reference humor, modern jokes, and uninteresting character traits pour from their beaks, maws, and jaws.

The effects don’t help the animals case either. The CG is all very cheap and bare bones. None of the animals look present. But it’s not just the computer effects. All of the sets look cheap and feel like their on a sound stage. I kept waiting to see the swords wobble when they collided with anything.

The most painful element of all is how uninteresting and blunt it is. The theme of loss and needing friends to be better is fine on paper. The movie just says it so many times, and blasts through development that you don’t feel any impact of it. Major plot events take place off screen or so fast that they have no meaning, or happen for no reason. A polar bear and ostrich become friends for kind of no reason. They argue, then the polar bear rescues him and then they’re friends. Sure (the polar bear also says “bro” like they said back in the 1700s).

The movie is just a mess.

Throughout the whole film I kept thinking of Fantastic Beasts and Where to Find Them. They both follow an a-typical doctor and animal friends who has a normal human sidekick, and fight off evil. I though Fantastic Beasts was kind of fine. This is a worse version by far. One, Eddy Redmayne can play a-typical way better than Robert Downey. In this Robert Downey feels like a clown over an eccentric human. Two, the beasts are not interesting. Robert Downey is with just normal, badly integrated animals only for a dragon to appear for some reason. Their personalities don’t make them interesting, so it’s just watching regular animals do animal things. It doesn’t work at all. Also, there is one line about dragons being a theory and then one exists at the end. Finally, the plot isn’t as predictable and safe. Fantastic Beasts at least had some creativity to what would happen with some red herrings, and fun side characters.

It hurts watching everything be so obvious, callable, and safe when Kid Who Would Be King came out around the same time last year and was totally above this in every way. It challenged the kids watching while this has a narrator walk you through every plot point at the start and end as if it were a book and not something we can just see on screen.

I saw some people saying that Robert Downey was playing a Jack Sparrow type, but even Johnny Depp is better at this than Robert Downey. Maybe RDJ just needed a nice safe space to decompress after his stressful and epic turn with Iron Man. That’s valid, but we didn’t need to see him pull a bagpipe out of a dragon’s butt and get farted on by that same dragon for him to decompress.