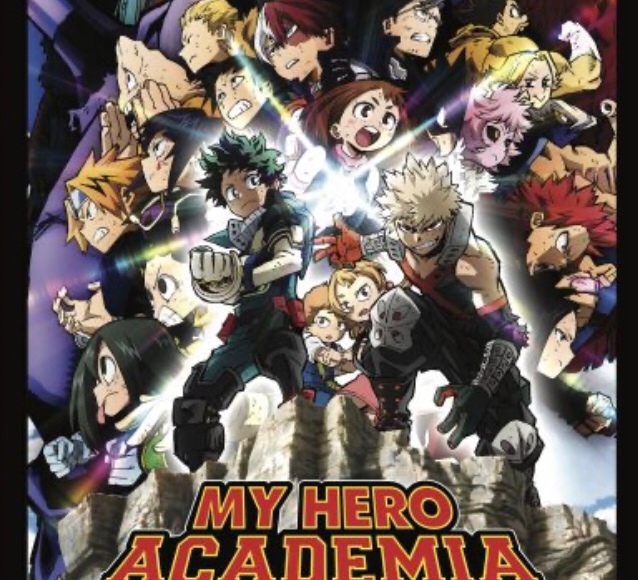 My Hero Academia is probably my favorite Shōnen anime/manga series. I say that reluctantly. Not because I think it’s bad, but instead because it’s a series that is not finished. I only need to mention Naruto or Bleach to remind anyone with any sense of memory of how a great, promising series can turn to trash. In the meanwhile it is the perfect mix of manga and American comic storytelling, and the best X-Men series ever made. The series has a big love and energy for superheroes and isn’t afraid to show that love off in all sorts of interesting and different ways.

There was another film before this one. I did an editorial over a review for it. Overall I’ll say it was an elevated filler arc with little impact or story relevance, and didn’t have the production values like most Shonen Jump movies have to make me enjoy the ride.

This film is a mark improvement over Two Heroes (which should have been the title of this film). It follows class 1-A as they participate in a work study acting as a hero agency on the sleeping Nabu Island. Events get more complicated when a group of villains attack the island for their own gain. It’s then up to Midoriya, Bakugo, and the rest of class 1-A to protect the island, its people, and two children that seem to be the target of the villains plans.

Where this movie shines is just in being a really solid My Hero Academia arc. So a compliment to this film is really a compliment to the series as a whole because it feels so close to the spirit of the series. That means all the characters feel really distinct, relationships are given space to be complex and layered in short time. The students want to be heroes and do good so, so badly that it comes out of every pour in their bodies. The action is great. It’s well directed, the choreography and use of powers is creative. Finally, the team manages to give every hero some big moment in this hour and forty minute movie better and in a more satisfying way than even the really good bits of the Avengers movies. It can just be felt how happy the team was that they got a second chance to make a film in this universe and wanted to capitalize on it in ways they didn’t before.

The screening I went to used the English dubbed performances. I’m a filthy casual despite having watched a lot of shows so I still prefer the dub of these series. I like all the voices. The only new standout this time is Johnny Young Bosch of I don’t have time to list all the stuff he’s done, as the new villain Nine. He puts in the work to make him interesting even when the script and his actions do not.

In my editorial on Two Heroes I noted how the production values were not really movie quality. I need to redact that. Not because I feel they suddenly are, but because the series is incredibly cinematic when it is going. The reuse of clips from the show is kind of cheap and obnoxious even if it is serving a purpose, but they also help highlight that when it puts that energy out there it feels like a movie. This film is similar in that regard. When it is really firing on all cylinders it is an incredible piece of animation work. Other times it uses still shots and reuses animation from a previous scene in the film. That in comparison to the works of Studio Ghibli or Mamarou Hosoda is just not acceptable.

The movie does have other problems aside from its production. The islanders are all pretty flat and one note. The two kids the class of 1-A has to protect are also not the most interesting. The point and story is pretty clear from scene one, and the fact they become the McGuffin for the third act makes it all so formulaic and predictable.

The worst thing however needs to be explained. So for the 90% of the film I found this to be an arc that I felt was important and should happen somewhere in the canon. It shows the heroes getting better and taking more steps to reach their goal, and subtly advances the main villain plot all fairly seamlessly. I was ready to cry this as one of the key pieces of the series. That all changes at the end of the final battle. The final battle is a real treat of animation. The heroes all get something to do and they put in real effort to win. The problem arises when they make the main villain way too strong and in order to beat him Midoriya and Bakugo have to go full fan fiction in order to win. I can’t predict what you’re thinking, but it’s probably right. They really did that, yes, that. It really ruins the film for me as a fan who felt the team understood this series until that moment. It doesn’t ruin the whole film by any means, but does make me sad that they went to the dumbest option for no reason other than, admittedly amazing, spectacle.

Even with the problems I really like this film. What makes it even crazier is how it feels like it was made like a week ago based on how much current information they are pulling from. The team loves My Hero Academia, and like the heroes of the series, tried its hardest to express that love. I mean they get Bakugo so well that when the villain goes on his monologue he just tells him to shut up because he’s so obviously wrong and stupid. It’s great.