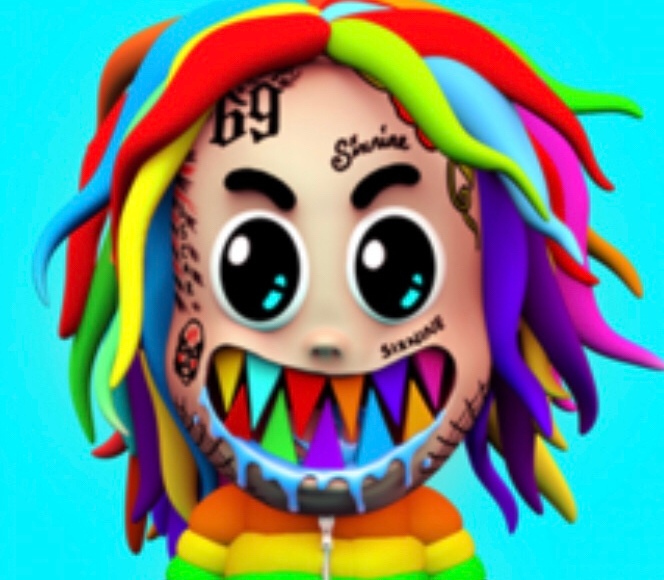 It is easy to make fun of Post Malone’s look. In fact I did so in the review of Circles (it’s good, you should read it), but at least he has a look that is consistent with the kind of music he makes. 6ix9ine on the other hand…

To be frank (I mean Connor, but you get the point), I don’t understand the drive to look the way he does. The best description is if unicorn poop was mixed with skittle, and the four spirits of alcohol. But looks are fine, whatever. I do think it is weird that a man who looks like he should be writing the newest My Little Pony theme song is making the most aggressive rap song I’ve heard in a long time.

GOOBA (which title makes no sense…) feels like a joke song. More directly, I hope it is a joke song because it is so juvenile that it feels like parody.

GOOBA is not a song to go through verse-by-verse. It is a short, barely two minute song, that consist mostly of 6ix9ine rapping about violent actions, and calling people out for being lame (essentially). That concept for a song is pretty standard, but it’s very base-driven, yelling, smash your eardrums approach is very different from what most popular rap has been. It’s laudable to do, but laughable because that contradiction in appearance and attitude honestly feels funny. It feels like it was made to be laughed at.

That feeling of making the most serious joke rap is incredibly prevalent in the lyrics. Though there is no deep meaning to take out from them, just listening (and for you, reading them) highlights just how basic, simplistic, and low effort the song feels. The first line that sticks out is “As-salama-lama alaykum, you big hater.” I mean… like, going to the Arabic saying with a bunch of random syllables in front of it feels like something I would rap as a joke. Similarly, there are lines that are actual words, but when rapping sound like he’s just making noises. On top of that he uses both “big mad” and “big sad” unironically, and then as insults a couple of lines later in “Big mad, he’s mad, she’s mad, big sad… Ha-ha, bitch, I’m laughin’ ’cause you big mad/See it in your face, cry baby, bitch you big sad…” It’s just ridiculous.

Honestly, reading the lyrics and listening to the song. It is short, but it honestly feels padded. It has two verses that say nothing other than being violent and stuff, and then the big mad/big sad stuff, and it’s over. The fact a whole verse is basically covering the big mad/sad feels cheap.

The video continues to feel like a parody of these kind of songs. It features 6ix9ine in a couple of colorful rooms as women in rainbow leotards (rainbow as in each woman wears a different color, they are not dressed in the Gay Pride flag) dance to the music with intercutting of more perverse shots of the women getting covered in Nickelodeon slime while the room is being lit by strobe lighting. Also 6ix9ine plays with a Dalmatian. If the video was about something, it would be interesting to contrast a dog who is only black and white with the women in their leotards, or 6ix9ine himself in his flamboyant outfits. Only, the video is not that. It’s just 6ix9ine rapping to the camera as women dance in a Lisa Frank room in order to contrast the vulgar things he’s saying. It’s nothing.

The song is kind of nothing. I am aware that this is his first song back from his stint in prison for something (not important to the review), and it feels like he is getting his aggression out, but it also feels like he went with the first words that came to his mind instead of really forming strong verses and chorus to get that anger across.

All I’ll say is that a knife to the ear is more effective than a punch.