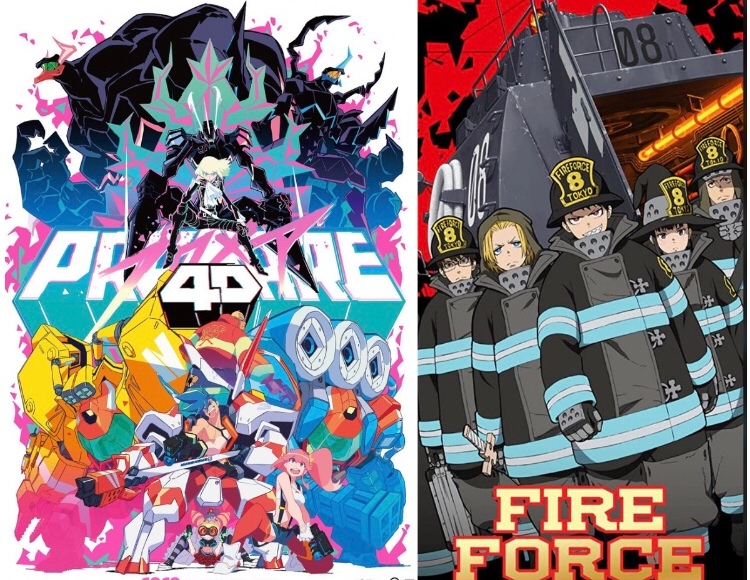 Now more than ever people are faced with a threat unlike anything faced in recent history. It is not hard to draw comparisons to pre-apocalyptic stories and events. Of course pre-apocalypses are not as fun (to go through or witness. Though, I’m sure Mad Max and the characters of the Walking Dead are having a terrible time, but stuff actually happens) as post-apocalypses. And in media one type of mysterious post-apocalypse that should be bigger than it is, is spontaneous human combustion.

In my end of 2019 wrap up of ranked films I said that Promare had such an original premise, that of firefighters who fight demons who create fire, only that was not the case. Turns out Atsushi Ohkubo of Soul Eater fame had a similar idea and created the manga Fire Force.

The two stories have quite a bit in common from the outset. This comes from the fact they are similar ideas. Both stories follow a fire fighting team as they deal with monsters brought on by spontaneous human combustion. There is some political intrigue as groups know more than they let on, and a rebuilt government body. They both have very energetic and heroic leads with Galo and Shinra. On top of that, the leads have a rival sword wielded they want on their side, Lio and Sho respectively. Yet, even with those similarities in place, they have some major differences that set them apart and those differences come from the different themes each story is trying to convey.

Getting to the heart of the two stories differences both series have characters with pyrokinetic powers, but are treated vastly different by society. Promare combines their human combustion and super powers to create the Burnish. The Burnish are seen as second class citizens due to their passion to burn everything. They are so hated in fact that they are accosted, hunted, and used at every turn by the people in power. F

ire Force meanwhile has characters with pyrokinetic powers that developed with the human combustion (maybe it is better explained beyond what I have read and seen, but now it seems like a coincidence and has no explanation as to why people have fire powers) of different levels and work to stop those turn into infernals, demon-like creatures that humans turn into when they combust. Their power and actions are ordained by the government, and holy temple, Sol, they serve.

If the breakdown between their pyrokinetic people are treated does not best explain what the two stories are about then a better comparison is that Promare have the Burinsh treated like Mutants in X-Men, while Fire Force has their pyro users as civil servants saving people, and holy crusader simultaneously.

Those differences are interesting enough, but what is truly interesting is how each story goes about conveying its ideas.

Promare’s style of storytelling could best be described as “the most” or “shotgun” to say the least. It is constantly going on all cylinders at all time. The double edged sword of that approach means it covers many topics, but only focuses on a few. For example, the found family and team dynamic is grossly underutilized in comparison to how much Fire Force spends on that dynamic. The plus side is that the themes of being who you are, the militarization of police, problems with the Silicon Valley Style inventing process, and misuse of progress are tackled repeatedly, and hard. So hard in fact that the movie feels like it was made for the perfect time… to be watched during the COVID-19 pandemic and George Floyd riots.

To break it down exactly (and tell me if this sound familiar) a global pandemic is infecting some people, normal people are scared of those infected, leaders in tech work on solving the problem but are actually making it worse, a braggadocios man with stupid blond hair is the head of the government and got famous from doing something else, the same blond man uses his military and police force to stomp out those trying to be themselves, and is focused on the wrong tactics to stop the pandemic. Yeah… it’s that close.

Only, because Promare is the most, all of that is taken to absolutely exorbitant levels of excess. the blond man needs to be a jacked version of Elon Musk. The pandemic has to be people being on fire. The militarized police and the people they are oppressing need super powers and mech suits, and the main conflict needs to be resolved by using said power to the fullest in order to satisfy it by burning the world and starting it over.

Even with all of that, the main takeaway I get is disposable nature of people in (capitalism) the Silicon Valley-like tech world. This is best shown by the villain, Governor Kray Foresight (I said the movie was the most), using all his resources to abuse the Burnish in order to create a warp hole and escape the planet, and build a giant mech suit that has tons of terraforming tools instead of finding a way to solve the problem of the earth’s core fluctuating, and Burnish crimes. In the end the movie comes down hard against that. The Burnish are people who need to be who they are. The movie fails because we don’t get too much of who they are outside of Lio and the couple seconds in the refugee camp they built. Even with that, the basic idea of being who you are while not hurting others is powerful.

Fire Force by contrast spends a long time focusing on its two themes of found family, and dangers of religion. The found family is simple enough to see. Fire Force follows Shinra and his quest with Company 8 to solve the mystery of human combustion. The bulk of the first season (and little bit after I read of the manga) deals greatly with Shinra bonding to the company, and the company’s dynamic with each other, and the rest of society. It is constantly reinforced how being with a group that cares for you can help, and make a better world. It’s pretty straightforward.

The theme of religion on the other hand is trickier. See, in the world of Fire Force the world was remade through the founding of the Holy Sol Church. The church’s main goal is to save the souls of those turned into infernals by killing them. To that end they worked with the military and fire department to create the Fire Force companies. Each company has a different focus that builds the world, but it’s main focus is on what society is like under a theocracy.

The problem with the theme as it stands is how little attention it is ultimately given in the first season, and little bit of the manga past season one I read. The main points is how the church has taken over and corrupted the people’s mind to see the truth. The battle between that idea, and the possible truth comes when Shinra and company come into combat with the Evangelists, white clad humans who believe the world needs to be burned and start over (kind of like the solution in Promare, sans saving all the humans). Oddly enough, however, they are often used as an example of the problems with religion, and how religion corrupts people. That is shown through Sho, Shinra’s brother who was kidnapped, has amnesia, and believes he’s fight for the Evangelist to save the world, and Lisa, a woman saved by the Evangelists, given power, and abused into following their commands. In both cases they are people corrupted by religious ideas, and are saved from said ideas to differing extents. But in both cases they show the dangers of believing something whole heartedly.

These themes, again, are not as fleshed out, and have many questions based on where the rest of the series goes, but are interesting to consider.

While watching the two stories I kept thinking of zombie stories. Specifically the ways zombies are used to either show the horrors of mob mentality (Dawn of the Dead), and evils of humanity (The Walking Dead). In both cases real enemy the characters are fighting against is not the zombie threat, but what they represent. That is the same for these two series and human combustion. Promare isn’t about Galo fighting the Burnish. It is about Galo fighting against those who abuse other and look for a way out. Similarly, Fire Force is night fighting the Infernals, but the source of them. They are both about different things, yet have the same premise. Just like some people see a mole hill and others see a mountain.