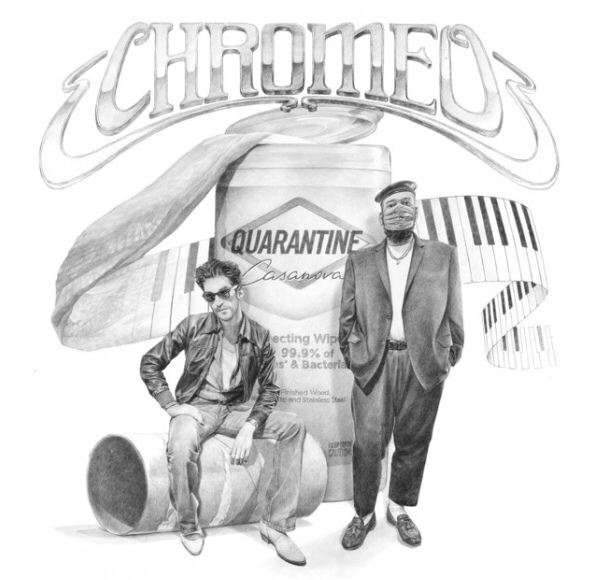 Listen to the album: https://www.youtube.com/playlist?list=PLY1M3Sn7byAx38AOggNi0jsLgx4acXfPy

This is the first week in a while that, if I did a Hot 100, would be scrapping down to below the Top 10. I’m sure I will get down there sooner or later, but in the meantime we have a pandemic going on and we need some good music to reflect that time. Ente: Chromeo.

If you haven’t heard of Chromeo I don’t blame you. They are a Canadian synth-funk band who are best known for being an incidental song in an episode of Community, and that one bit on Game Grumps. But in reality they just make good music. The newest of that music is there 5 song LP: “Quarantine Casanova.”

If you have followed the rest of my look at modern music the you are aware of how I’m getting tired of the trend to have much more dower, slow tempo, muted music. This has exploded moreso since the pandemic and requisite new releases of songs while artists are in quarantine. Out of those songs the one that stands as a good example is Justin Bieber and Ariana Grande’s “Stuck With U.” A truly dower, lifeless song that feels like it should be a breakup song, but isn’t.

But don’t worry. The more upbeat music doesn’t feel like it has enough lyrical life to really carry it. “Rain on Me” by Lady Gaga and Ariana Grande (boy, that Cat from Victorious is sure busy recently. Be nice if she released another good song) is a prime example of being upbeat, sure, but not being fleshed out to really enjoy what the song is going for. To be fair and keep it in the realm of pop music Dua Lipa’s newest album does mostly succeed in being that. Only we’re not talking about pop. We’re talking about the funkiest band this side of the 80s and how they perfectly craft the most enjoyable version of chill-funk-synth.

During this pandemic there has been two types of songs. 1: songs that use the pandemic and it’s memorabilia as an analogy for something, or 2: lamenting the state of the world, uncertainty of what is going to come, and stress of being cooped up all day. Quarantine Casanova, thanks to it being a five song LP hits both, with the final song being a sort of mix between the two concepts.

It’s unclear how planned out the structure was, but the first two songs: “Clorox Wipes” and “6 Feet Away” match with the first type of song. “Clorox Wipes” being an utterly silly unrequited love song about finally being useful and wanted like a Clorox wipe. It is a good hurdle if someone hasn’t listened to their music before and want to start with this album. It shows just how silly, yet earnest the band can be, as well as what their musical flavor is like.

That musical flavor gets a hint of Toto (meaning basically Africa, the one song we all know) with “6 Feet Away.” A song that is also silly, but focuses on what trying to romance someone in the age of COVID would be like.

The next two songs “Stay in Bed (and do nothing,” and “Roni Got me Stressed Out” are both very straight forward takes on their respected concepts. “Stay in Bed” is a good ode to being okay with being lazy during the pandemic, and calling out people who don’t have to work but trying to sound like they are still busy. Commenting on how workout plans and watch lists are suspect and stressful are very good. Meanwhile “Roni Got Me Stressed Out,” is again, very straightforwardly about how all the changes and uncertainties are making us crazy. Then being scared if someone sneezes, or if they can only go on tour by 2029 are all real fears about what’s going on, but packaged in an enjoyable way.

The album ends/coalesces into the song “Cabin Fever.” It is a mix of both types of COVID song, while also being the most dower or sad of them. In the song it uses the trappings of the previous songs, the straightforward malaise of being stuck inside without anything to do all to build a song about being stuck and wanting to get out, evolve, and change. All while finding a way to rhyme the brand Kowasaki in there. It’s a solid enough track to end on that, for as much fun as can be had, does bring it back to how serious the situation is while somehow referencing making pillow forts.

As for weaknesses, I bang on about the repetitive rut many songs get into now, and this album is no exception. Each song has its own distinct beat and wave they stick to that can get you lost and unfocused. However, kind of like Daft Punk, use such different kind of beats that are more of a throwback or layered they are easy to overlook.

I am heavily biased because I love their music. I like that synth sound and feel like more music could be built on that. I also like how, for being so silly, childish, and douchy they can be, that it’s all an act. One member is my favorite trope, a legit college professor who also does silly party music. They are great and are donating all revenue this album receives to charity. Not many people would do that, or if they do make it a thrust of the advertising for the song. It’s really classy for a band and album that has a song all about wiping stuff down for a person they like.