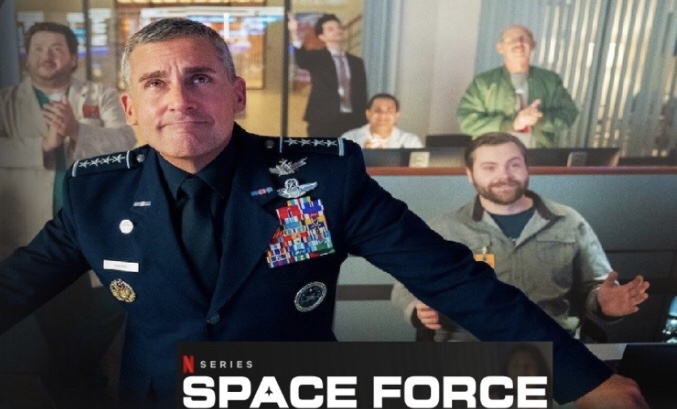 Greg Daniels has been on a roll with his new series. He had the incredibly disappointing Upload for Amazon Prime, but this time he’s teamed up with Steve Carrel of The Office fame to help craft his newest work place comedy, Space Force.

Space Force follows Steve Carrel as a recently promoted four star general, Naird, who is tasked with creating the space centered branch of the US military under orders of POTUS. This requires uprooting his family from Washington DC to the middle of nowhere Colorado. The show cuts to a year later, after the base is established to help set up the show’s supporting cast. This includes John Malkovitch as Naird’s science consultant Mallory, along with Ben Schwartz as a media manager, Jimmy Yang as a member of the launch team, Diana Silvers as Naird’s daughter, and Lisa Kudrow guest stars as Naird’s incarcerated wife. Together, the team works to launch America into space and fight off the evil inconveniences of China, India, and Russia.

Right off the bat it is refreshing to have a show, and a Netflix show no less, that is mostly episodic. There is an over arching narrative that leads to the first mission to the moon, but it’s done in a really refreshing way. Instead of how, for the sake of comparison Upload, has multiple plot threads running and it feels like each episode is just checking in on where they are going like chapters in a novel, the show does full three act stories but those stories have consequences. China destroying a satellite in one episode leads to a whole Apollo 13 parody the next. That’s not true for all of them. Some, like an episode where ther Theranos of rocket fuel and Silicon Valley tries peek its head in is totally stand, but built on past episodes.

On top of that the character interactions are all very solid, along with the preformances. Mallory and Naird have a very good, if generic, dynamic. Naird and his wife also have an interesting dynamic that develops later into the season. Meanwhile the side characters like Ben Schwartz’s F. Tony and all the members of the base are hysterical, as well as Jimmy Yang’s scientist’s relationship with Tawny Newsome’s Captain Ali. They just all work off each other. It’s a shame it is never usually funny.

It feels really difficult in retrospect to see what made The Office and Parks and Rec work. Both of those series really pushed and cotified the idea of “cringe” and awkward humor that everyone else has failed to really match. I think the best way to describe why those worked while this season did not is that in The Office everyone is joking around already. They are talking to make the people around them laugh, or are failing at what should be normal tasks in ways we secretly tread we would do, but it’s funny people so it’s okay. Additonally, the situations were not all so outlandish (until later seasons).

The point is that as good as the interactions are, none of the characters are funny. They are both the straight man and the jokester depending on the scene they are in. What should be good character writing in that case instead comes off as mishandled communication of what the joke is, or if it’s trying to be a joke since the show often feels very serious. It also does not help that the shows attempt at modern political humor falls flat. All the POTUS (it sounds so cringe saying that, just call him the President. I mean I’m sure you don’t want to, but it sounds less dumb) and senate jokes feel all very surface level. An example is the senate debate on their budget they have thinly veiled charictures of AOC and every super-right Republican. They don’t feel fleshed out, just shallow. Also, the final episode is terrible. It tries to squeeze in so many events regardless of how they would flow with the narrative leading to it being a jarring mess.

Since I started watching the show I constantly had The Martian coming into my mind. Ridley Scott’s modern sci-fi classic is one of the best movies of the last decade and feels like the exact opposite of this show in every way, even as Space Force tries fo make fun of it. The Martian is about cooperation, unity, and making good jokes sith well realized characters while Space Force shows the worst in all our governments no matter how much it tries to argue otherwise. In the end it feels like the hollow, slap dashed attempt to make fun of Donald Trump’s silly military idea that matches the intelligence of the man who came up with the idea.