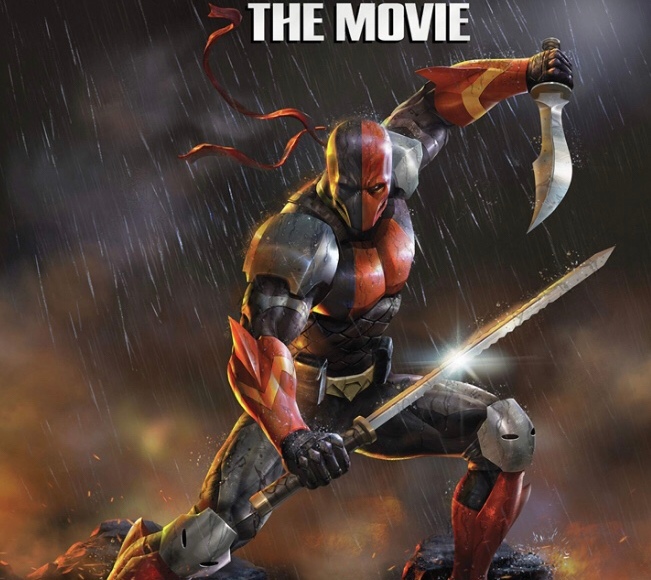 Deathstroke as a character was one of the first villains/anti-heroes to get his own spin-off comic series. Though popular culture seems to have forgotten that, they hadn’t forgotten that he was the standout character in the Teen Titans show, and just a cool design with more of a backstory than most anti-heroes. It makes him ripe for movie potential, and is sad that his Marvel counterparts, Venom and Deadpool, got to cinemas first. Though he still doesn’t have a live action movie (apparently the Raid director was signed on to do one… that would have been amazing), he finally got a direct to video animated feature.

After an extended prologue that goes over Slade’s backstory, a former soldier, turned mercenary with enhanced powers. He tries to lead a double life, but when his son Joseph is kidnapped he saves him, but Joseph ends up mute in the process. Slade, racked with guilt goes solo. That is until he is contacted by HIVE, the group that kidnapped his son, to say that they have succeeded this time. Only Joseph is not the helpless boy he was. Instead he is gaining psychic powers. Now Slade must use his identity as Deathstroke to find his son with the help of his ex-wife before HIVE uses his powers for their own gain.

Making Deathstroke into a dad-bro action hero, a la Liam Neeson or Bruce Willis, is a unique direction to take him in. Michael Chiklas does a great job getting him to it though. He gives him a warm tone that you could see easily turn incredibly kind or scorchingly evil. Both of which happens. The rest of the cast fits their roles well enough.

The new animation and art style is also an interesting departure from the anime-lite style the old New 52 universe had. This has a fresh look to it. A mix of classic 60s-80s comic art and fairy tale inspired designs lead to some striking images but not the most constantly fluid animation. The fights do work for the most part in conveying the weight, damage, and bloodiness of them. Unfortunately there are no totally insane fights. The most is a quick underwater shootout with sharks swarming them. It’s briefness hampering the fun of it all.

Unfortunately the rest of the movie is fine. Even after the twist is revealed and the true point is made totally clear it feels strange to have a medieval setup but not go anywhere with that since this is just a dad-bro action movie. It decides to lean into the absentee dad angle to hypothetically good effect. The movie understands what it’s trying to get across, but has a problem with reusing animation at inopertune moments, making them jarring. It also has the same problem The Old Guard had, of misusing exposition and overexplaing elements that did not need it. These factors lead to the idea of a knight slaying dragons to being window dressing at most and a waste of time at worst. I think it’s supposed to be saying Deathstroke is a knight slaying the corrupt dragons of our world but that’s not emphasized nearly enough to be effective.

This movie is better than fine, but feels like the weakest of the WB animated films to come out. It’s not as bloody or viceral as the Mortal Kombat film, and it’s not as good a story as Justice League Dark. It’s just the animated equivalent of Taken 2. It’s better than a regular one of those movies, but still kind of dull and not as thoughtful as it thinks it is.