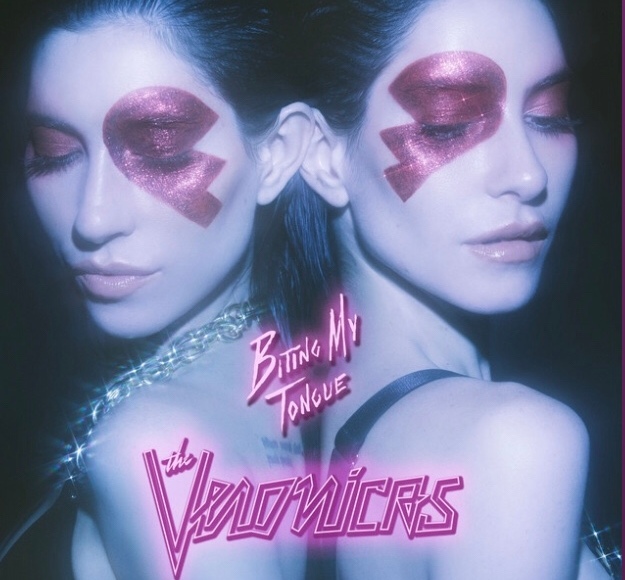 I do my best not to take breaks from watching the Hot 100. Despite no one asking me to, I still try to be consistent on watching it and keeping up with music. But something I’ve learned even after only doing this half a year, is that only a few songs stay above the Top 10, and those are the ones I usually have a bunch to say, or have to make jokes just to reach my own arbitrary length. I say all of that to say this: the new BTS song is fine. More of the same as the last song from them I reviewed. Even with that I want to take a break and look a new relatively new single by a band I like, Biting my Tongue by The Veronicas.

The Veronicas, despite only learning about them earlier this year, seem like a strange band (duo technically) to still be around. They made their name with punk-pop hits that are of writing caliber above normal pop, but end up being more weird and kitschy because of it. It all still plays well for clubs, but feels just off enough to raise heads. It might be because their main audience is Australia. They don’t thrive much anywhere else, and seem happy with where their music has gone, but still strange they keep releasing songs. None feel stranger than Biting my Tongue.

Biting my Tongue is only strange in how it feels far closer to a normal Lady Gaga, Katy Perry, Ariana Grande song. It sound specifically like both of Gaga’s newest hits. Though, even as it sounds like those songs with lots of standard pop beats with little flare to them, it’s presentation of the theme is different.

A title like Biting my Tongue conjures many possible meanings. This one is of not speaking up because in being complacent the narrator would lose their love interest. It deals with the complex feelings of thinking someone is only a friend until faced with the possibility of never seeing them again, or of how saying your true feelings might endanger a current friendship with them.

The lyrics find a strong way to balance those feelings out through careful, if overused wordplay. The issue with that means they often get lost in the beats and become white noise to the rest of the song. However lines like, “I don’t wanna lose this thing that we got/I’m just telling you how I feel,” paint in very direct colors her feelings, but effectively deliver the message.

More striking lines like, “I can’t get enough of the way that you’re looking at me/With those eyes,” and “Letting you in under my skin/Then I give in like a fool in love,” give off the same feel but with a little more flare. Unfortunately, like most of these songs, we still don’t know what makes this person special. That’s a deliberate choice, but it always makes it harder to latch on when there is so little.

The video feels like part of a larger whole. It feels closer to the Save Rock and Roll video album by Fall Out Boy. To explain, the video is a Romeo and Juliet story of two feuding groups, each with a set of twins, one of each, a guy and girl (despite the fact the thumbnail was two girls that make sense in context but was hoping for LGBT representation for the song) get together but are physically torn apart from their family with someone having been shot by the end of the video, making it a cliffhangers. This makes it kind of feel generic as far as videos go. It makes the “I can’t live without you,” line more explicit by having someone get shot, but I was distracted by a new reading that can’t possibly be the intent.

So often in the star-crossed lovers story, one love interest tries and fails to talk to their parents or doesn’t at all. So, building in the idea of biting my tongue, it seems like it should be that the person has to hide their feelings around one set of loved ones and can only share with the partner. The change/point of the song would then be breaking that to express feelings and get validation from it. Part of that seems like it’s in the video, but too many lines are about romance for that to track. It would be a cool idea at least.

This song is part of the rise in, what the best artist in the game, Dua Lipa, calls “Dark Pop.” I’ll ignore the silly name only because it’s as obviously bad as writing the words: Dark Avatar, and expect us to take that character seriously afterwards. The point of the music is not as silly. It’s to paint the normally torturous emotions in a heaping helping of body glitter, flashing lights, and energy. In that it succeeds even if it does feel weaker and less specific than even their previous single “Ugly,” or some of their early works. In other words a band went from the line “I never looked at you that way/I always thought you were gay,” to “What would I, what would I, what would I do?/ I can’t live without you.” To me it sounds like someone was really biting their tongue there.