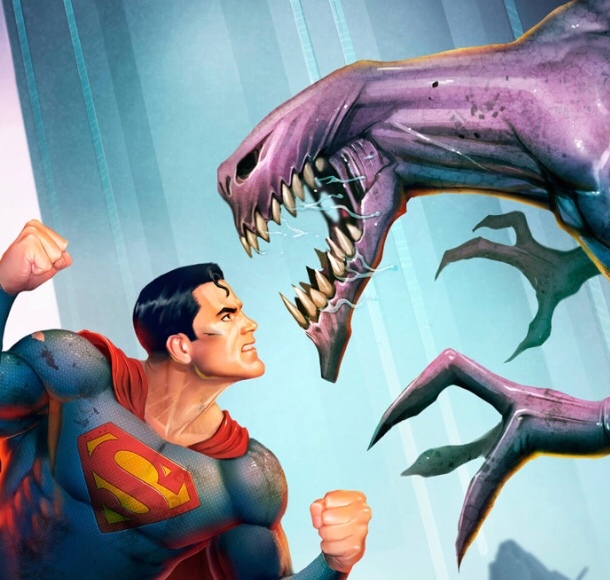 It is still so impressive that Warner Brothers and DC have continued to release direct to video animated films based on their characters. Something that is so utterly 2000s surviving this long shows some skill and ability along with ranges of storytelling and chabges in art style over the years help show how the teams have evolved and change. They already went through one of the biggest changes in ending their New 52-alike universe with an utter banger of a film and have been looking for smaller solo films. Deathstroke was a fine enough revenge feature, but to truly be a new step forward you should always go back to the OG superhero, the man who originated that name.

Superman: Man of Tomorrow acts as an updated origin story for Superman. Taking place in a time where Clark knows he’s an alien and has powers he uses as the Flying Man, his status quo changes when space bounty hunter Lobo shows up looking for the price on his head. After a showdown and intervention from a Martian, J’onn, a man gets hurt in the crossfire. When hotshot reporter Lois Lane, hot off of her outing of Lex Luthor as a criminal, gets on Clark’s trail to find out who he really is Clark must find out for himself before he is exposed and a new monster wrecks the city.

What makes this such a great Superman movie is multifaceted. The biggest standout is how they have a Superman that acts like a Superman. He saves lives, protects people, and is kind hearted. Though it is carried by the expert performance of Darren Criss. But the whole cast is utterly brimming with talent and energy for days. Zachery Quinto of Star Trek fame is an utterly devious and charismatic Lex while Alexandra Daddario (last seen on this show as playing the insane Alexa from We Summon the Shadows) plays the exact opposite as a strong willed and hard driven Lois Lane. There is not a single weak link in the cast.

Of course a good cast is supported by expert art design. The characters brim with personality. The solid mix between classic comic and updated style shows a strong attention to detail while the Metropolis feels utterly perfect and futuristic. Though there aren’t many, the fights that break out all feel weighty and well choreographed with expertly timed highs and lows.

It’s not a perfect film after all, it does have lows. Clark not being the one to figure out about his past and needing help feels wrong and cuts down on his journey of self discovery. There is a second act death that is revealed to be a twist that isn’t really explained but works to tie in the idea of being the last of their kind, and this film breaks the cardinal sin of Superman (before you know, people thought he should kill others). That sin being Superman getting his costume idea, even tangentially, from Batman. To clarify, Batman doesn’t show up, but does have a cameo in the Daily Planet and has his costume used as inspiration. Outside of that it is just an all around tight movie that feels effortless in making Superman feel plausible.

Though the movie is good, and it is, it doesn’t feel high energy and that was worrying. It had good pacing but didn’t feel like it was going anywhere fast. That was until the climax. In the climax everything fell into place so well, and gave a strong self sacrifice that showed how anyone can internalize what Superman stands for. It is bold, bright, uplifting, and all around a good time and a strong start for whatever movie they do next.